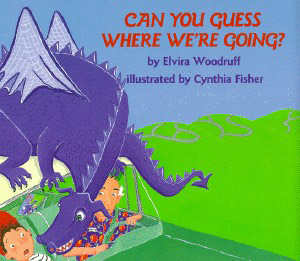 “Can you guess where we’re going?” Grandpa asks Jack as they head off for an adventure-filled day. Jack lets his imagination run wild when Grandpa starts giving him some clues – maybe they’ll see monkeys on their journey, or perhaps a knight in armor, or even a T-Rex!

Are they going to the zoo, to the museum, to the movies? Children will have fun following Grandpa’s crazy clues and some not-so-subtle hints, hidden in Cynthia Fisher’s delightful art, to try and figure out just where Jack and Grandpa really are going!

Praise for Can You Guess Where We’re Going?:
“While en route to a ‘very exciting place,’ a grandfather gives his grandson hints about their destination. According to Gramps, they might encounter monkeys, mountains, knights, dragons, snakes, dinosaurs, and more. The bewildered boy guesses the obvious – zoo, museum, aquarium, movie – and is happy to discover that their mysterious objective is the library. Colorful cartoon illustrations, including many double-page spreads, depict the car ride and Jack’s imagined view of where they are headed. Visual clues will help astute readers guess the destination. Most pictures include images of books or recognizable book characters. While the artwork and narration are competent and effective, they are not outstanding or particularly memorable. However, this is a title that many libraries will want to own for its message-libraries and books offer unlimited excitement, adventure, and entertainment. Consider using it during class or group visits to the library.”—School Library Journal

“Woodruff’s book is a treasure hunt for a destination, with hints rattling like hail all around readers. Gramps is taking Jack out for the day, but he’s not letting on just where they are headed. He does give Jack clues – impossible clues, e.g., there will be monkeys there, and perhaps they can bring some home. Sea turtles, pastries, mountains, dragons, and knights also come up in conversation. Throughout the journey, Fisher drops additional hints in color-mad, busy illustrations that feature a lot of books. When the two finally pull up in front of the library, it comes not as a surprise but as a pleasant inevitability.”—Kirkus Reviews