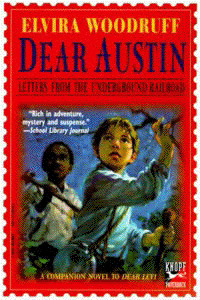 Dear Austin,
I reckon you’re going to be anxious about what I’m about to do, and Miss Amelia will be, too, when she finds out.

Once I understood that Jupiter was heading south, to find Darcy, I couldn’t let him go alone. Now, you know that I’ve never been farther south than the Fentons’ farm, and I don’t know what North Carolina will be like. But I can’t sit here in Sudbury doing nothing, knowing that I was responsible for Darcy’s kidnapping in the first place.

So we hatched a plan to go together. I’ll write to you from the road and mail the letters when I return. I don’t know when that will be, Austin, and I hope you won’t be worrying to much in the meantime.

Traveling south is such a dangerous thing for Jupiter to be doing, and I wonder at his courage. I only hope we have enough between us to do what we’re setting out to do. 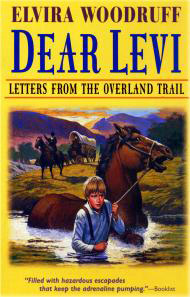 Praise for Dear Austin:
“Readers don’t have to read Dear Levi to enjoy this sequel, a gripping historical novel that covers two boys’ journeys from innocence to manhood. In 1853, young Levi and his buddies, Possum and Jupiter create a daredevil’s club, through which they attempt to outrun bulls, jump off cliffs, and investigate strange occurrences in their small Pennsylvania town. The tone shifts from the humor of boyhood scrapes to tragedy when Jupiter’s little sister, Darcy, is captured by slave traders. Jupiter and Levi head south to find her, a journey that is particularly eye opening for naive Levi. The action unfolds through his letters to his brother, Austin; these range from laugh-out-loud funny to poignant. Powerful emotions are subtly and expertly conveyed, from Levi’s amusing embarrassment in dancing class, to his guilt for Darcy’s kidnapping, to his horror at the slave auction. Woodruff combines swift pacing, historical detail (Harriet Tubman makes an appearance), humor, suffering, depth, and precise characterizations, for a wholly satisfying page turner.”—Kirkus Reviews

“Set in 1853, this sequel to Dear Levi (Knopf, 1994) consists of letters written by 11-year-old Levi Ives to his older brother Austin. Remaining with his guardian, Miss Amelia, until he is able to join Austin on the family claim in Oregon, Levi describes his escapades in the Pennsylvania countryside with his friend, Jupiter, the son of a former slave. When Jupiter’s sister is captured by slave traders, the two boys undertake a dangerous journey south to try and free her. While hiding in the woods, they meet Harriet Tubman, and Levi realizes that Miss Amelia and some of his neighbors are part of the Underground Railroad. Rich in adventure, mystery, and suspense, the succinctly written narrative depicts Levi’s struggle to understand the prejudicial attitudes of others. The boy’s life of freedom is beautifully juxtaposed against Jupiter’s life and his constant fear of capture. The plot advances through Levi’s letters, which also speak about his feelings for his guardian, his friends, and his brother. Each character is an individual whose actions are believable in the context of the story. This carefully researched and vividly imagined novel presents the emotional and gripping tale of one boy’s confrontation with the issue of slavery and its significance in American history.”—School Library Journal