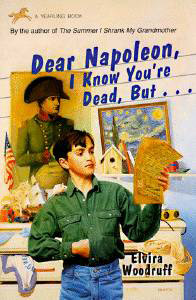 One day, Marty Belucci’s teacher gives the class an exciting assignment: they must write letters to famous people. Marty decides to write to Napoleon, even though he’s dead, and the teacher objects. Then Gramps tells him about something strange and wonderful going on at the nursing home where he lives – a secret courier service that can deliver letters to people in other times and places. Gramps mails Marty’s letter, and several weeks later, a letter comes back – from Napoleon himself! More letters get exchanged between Marty and Lincoln, Marty and Edison, Marty and Van Gogh. The supernatural correspondence causes an uproar at Midbury Elementary.

Are the letters real or did Marty forge them? Marty tries to find the secret courier service to prove the letters aren’t fake, in this upbeat, offbeat novel.

Praise for Dear Napoleon:
"Faced with a school assignment to write a letter to a famous person, Marty chooses to write to Napoleon Bonaparte. He has heard all about him from his grandfather, a lovable old coot. When the elderly man is forced into a nursing home, he tells Marty that one of the other residents can actually deliver the letter to Napoleon. Several weeks later, Marty astounds his classmates and teacher by receiving a letter, postmarked Paris, from the Emperor himself. The boy goes on to receive other missives from, for example, Abraham Lincoln and Thomas Edison, and eventually comes to believe that his grandfather has pulled off an elaborate hoax. However, following the old man’s death, a last letter arrives from Vincent Van Gogh, adding a bit ambiguity to the story. This unresolved element does not detract from the mystery, since most readers would be disappointed if the letters were the mere product of playful scheming. Throughout, a nice balance is maintained between the story’s serious elements and the humorous, fantastic parts. The affectionate relationship between Marty and his grandfather is particularly well rendered."—School Library Journal