In 1703 when a storm brings down his father’s boat, twelve-year-old Digory Beale sets off alone, walking across the wilds of Cornwall. He must get word of his father’s fate – and his own. For if Father is dead, Digory can never go home again.

With no guide, no money, and no prospects, Digory’s journey is beset with problems – and plagued with nightmares of drowning on the treacherous Eddystone Reef. But all that is about to change when a stranger, Henry Winstanley, takes him on as an apprentice. A fun-loving daredevil, inventor, and gadgeteer, Henry lives in a fun house filled with robots, a roller coaster, and a dragon who snores. 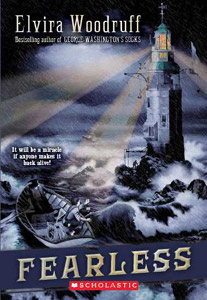 As a monster storm – part hurricane, part cyclone, and part tornado – threatens Cornwall’s coast, Digory finds himself on a mission with his fearless master to rescue a battered lighthouse on the Eddystone Reef. Will Digory be fearless enough to face his worst nightmare?

Elvira Woodruff’s gripping page-turning adventure explores the many facets of courage and the true price of conviction.

“This fascinating, well-written story is closely based on the life of the real Henry Winstanley. It introduces one of the leading inventors of the day and provides a glimpse, through the young brothers, of harshness of life for the common people during this period. The characters are finely drawn and the action is nonstop. Many of the short chapters are cliff-hangers, making the book a great read-aloud.”—School Library Journal

“Woodruff is best at capturing the perilous existence of the impoverished people on the Cornish coast, adding authenticity with many colorful local expressions.”—Booklist