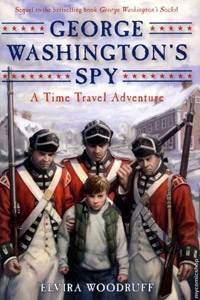 Praise for George Washington’s Spy:
“In this sequel to George Washington’s Socks (Scholastic, 1991), the members of the Adventure Club are again transported by rowboat back in time to the American Revolution where 10-year-old Matt and the other boys get caught up in a Patriot spy ring while his younger sister and her friends are rescued by a Loyalist family. The boys are immediately sympathetic to the Patriot cause and agree to help deliver a message concerning the Battle of Dorchester, which they also happen to be learning about in school at the beginning of the story. The girls, on the other hand, are horrified to be staying with ‘the enemy,’ but who is right and who is wrong becomes more complex as the story unfolds. The kids witness the Patriots doing terrible things to the Loyalists and realize that the Torys have reasons 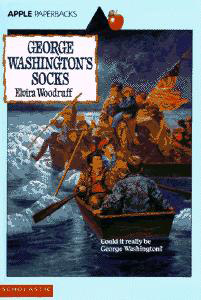 for staying loyal to England. Woodruff does an excellent job of conveying the complexities of war, particularly one that pits family against family in a very real way. This is a great introduction to the Revolutionary period, brought to life with historical figures and conflicts through the eyes of today’s kids. It also effectively humanizes those who were loyal to England. Alternating between the two sides, the story is fast paced, exciting, and informative.”—School Library Journal

“The action is exciting and the descriptions of colonial life during this time period will be meaningful to young readers. It’s funny, too, as the characters deal with the differences in lifestyles between contemporary and colonial America.”—Children’s Literature