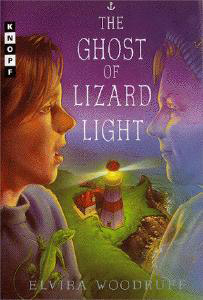 As the Carlton family car barrels toward Maine, ten-year old Jack is slumped in the back seat, missing every single thing about Iowa. Then his dad pulls up to their new home – a lighthouse cottage at the edge of the ocean – and, suddenly, moving doesn’t seem so bad.

However, at the stroke of midnight, the Lizard Light cottage reveals an unearthly surprise: a ghost-boy has been wandering its halls for more than a century. To Jack’s horror, Nathaniel Witherspoon materializes at the foot of his bed that first foggy night, and announces, “You’re exactly the kind of boy I need.”

In a harrowing story of high-seas rescue, it’s up to Jack Carlton to unlock the 150-year-old secret of a long-ago shipwreck that claimed many lives – including young Nathaniel Witherspoon’s.

Praise for The Ghost of Lizard Light:
“Ten-year-old Jack Carlton and his family have just moved to the small fishing town of Minty, ME, where his strict, unreasonable father has become the new elementary school principal. One night, the ghost of Nathaniel Witherspoon, a boy who died 150 years ago, suddenly materializes in his bedroom and cryptically tells Jack that he needs his help. The sense of mystery and suspense builds as Nathaniel continues to ingratiate himself to the lonely, confused boy, while Jack’s relationship with his demanding father deteriorates even further. Readers will sympathize with Jack, who is forced to do extra math homework over the summer and whose anger and shame increase with each new scolding. The ghost and a family boating accident provide the means by which Jack eventually reverses his father’s poor opinion of him and becomes a hero. The supernatural side of the story plays second string to the realistically portrayed father/son relationship. Clayton’s occasional pencil drawings adequately depict the characters and setting in this engrossing tale.”—School Library Journal

“Kids will appreciate the idea of being chummy with a ghost, and they’ll revel in wondering if he’s real or not.”—The Bulletin of the Center for Children’s Books