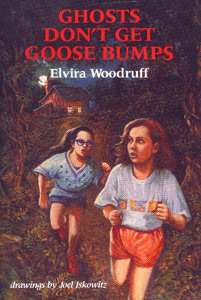 Eleven-year old Jenna spends the summer in West Virginia and makes best friends with Angel Always. Angel, named after a soap opera star, thrives on dramatic situations. When she discovers that Jenna’s little brother, Nelson, is five years old and still can’t talk, she persuades Jenna that he can be cured. All she and Jenna have to do is wait until nighttime and drag him to the haunted marble factory, where they’ve earlier sighted a ghost with yellow wrinkly fingers and an arm “with lots of goosebumps all over it.” The factory is so spooky, they think Nelson will be scared into speaking. Jenna is almost too scared herself to carry out the plan, but finally agrees when twelve-year old Zack says he’ll go along. Things backfire, however, when the older kids meet the ghost again before nightfall, and Nelson mysteriously disappears. How Jenna and Angel finally unravel the mystery about the ghost and help Nelson ends this suspenseful, heartwarming novel.

Praise for Ghosts Don’t Get Goosebumps:
“In this novel, Woodruff takes on ghosts, asthma, a selectively mute five-year-old, and an aging mentally ill man. It works. Without a hint of the saccharine, she tells the story of Jenna, 11, and her newfound best friend, Angel Always. The two meet during Jenna and younger brother Nelson’s summer-long visit to their aunt and uncle’s farm in West Virginia. The girls decide to dedicate their summer to giving Nelson the surprise of his life – the one that will make him finally speak. The drama unfolds as the girls and Zachary, a weekend visitor, learn that the farm is built upon a haunted marble factory. Thinking that the factory’s ghost will get at least a scream out of Nelson, the three conspire to take him there. Events follow quickly as Nelson disappears; Zack suffers an asthma attack; the ghost turns out to be crazy old Irwin Loop, whose father once owned the factory; and a near-death experience for Jenna forces Nelson to tell the rescue team where to find her. Much like Woodruff’s The Summer I Shrank My Grandmother (1990) and Awfully Short for the Fourth Grade (1989), this is a feel-good novel with a fast-paced, well-written story. It’s about strong friendships and lots of love between a brother and sister. Readers are sure to have goosebumps rising on their own arms at the end.”—School Library Journal

“Eleven-year-old Jenna and her five-year-old brother Nelson, who doesn’t talk, are visiting their aunt and uncle in West Virginia. Jenna is befriended by Angel Always (named after a soap-opera character), and the adventure begins. Angel convinces Jenna that Nelson will talk if he gets the right ‘shock.’ Add to that a 12-year-old boy with ‘great hair,’ a haunted marble factory, a mysterious disappearance, and an accidental fire. The result is a novel just begging to be booktalked. With believable characterizations, humorous conversations, and smooth narrative flow, this will be one title that grade-school kids will tell each other to read.”—Booklist