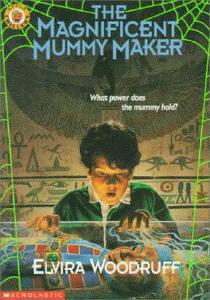 One day, after an odd encounter with an ancient mummy on a class trip to the museum, things begin to change for Andy. He suddenly can paint like a great artist, he can solve math problems, and even his handwriting seems to have become neater. But most amazing of all – everything he wishes for seems to be coming true. Andy is sure that he’s been infused with the mummy’s powerful spirit.

Realizing the infinite possibilities for using this power, Andy tries to decide what to do. Should he wish for “Mr. Gifted” to disappear? Should he wish for his mother to be alive? Should he wish for world peace? In his struggle to make his final wish the best wish possible, Andy discovers the real power within himself – and how magnificent he has always been.

Praise for The Magnificent Mummy Maker:
“Woodruff’s obvious enjoyment of mixing historical information with a modern adventure, seen in George Washington’s Socks (Scholastic, 1993) and Dear Napoleon, I Know You’re Dead (Holiday House, 1992), is again evident in this work. Andy Manetti’s life is filled with angst. He is constantly overshadowed at school and home by his stepbrother, also 10, who he has nicknamed “Mr. Gifted.” Andy feels average and almost unloved until his fifth-grade class takes a field trip to the museum. As he stares into the mystical face of an Egyptian mummy, an odd feeling overtakes him, and he soon finds that he has been imbued with magical powers. He is suddenly a gifted artist, is given five wishes, and is ultimately able to reconcile himself to his mother’s death and to his stepbrother’s existence. The book has a strong narrative voice, believable and likable characters, and an involving plot. The factual information is interesting, and Andy’s fantastical adventure is fun and well paced.”—School Library Journal

“Tired of being compared to his brilliant, 10-year-old stepbrother, Jason, Andy Manetti, also 10, resigns himself to mediocrity, but the plot thickens. When the fifth-grade classes visit the local museum, he feels a strong and powerful link to an Egyptian mummy display. Back at school, Andy draws an exquisite picture of a mummy case and soon finds that it has the power to grant him wishes. The magic may be imagined (Woodruff lets readers decide), but Andy’s final dilemma is real enough. Should he use his last wish to ship his stepbrother off to Mars or to bring his mother back to life? While readers may find the stepbrothers’ inevitable reconciliation less convincing than their original relationship of mutual dislike, the story will hold their interest, and the book jacket, with its spooky depiction of Jason mesmerized by some magical force from the mummy, will attract many kids to the book.”—Booklist