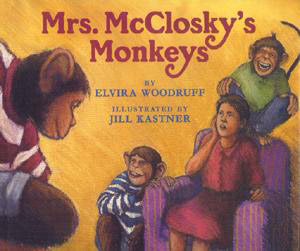 It was the first day of summer vacation, and Mrs. McClosky’s three boys, Martin, Michael, and Max, were so happy that they leapt, and climbed, and jumped for joy!

The only one who was not happy was Mrs. McClosky. “Oh, these boys!” she wailed. “No, they aren’t boys, they’re monkeys!” And one night while the McClosky boys slept, they began growing ears, tails, and fur. Soon after that, when the boys caused a stir at the zoo, the zookeeper invited them to stay – in the monkey house! Now it’s only a matter of time before the three McClosky boys discover that being a monkey in the zoo isn’t nearly as satisfying as being a little boy at home.

Elvira Woodruff’s humorous, whimsical tale and Jill Kastner’s bright, energetic illustrations are sure to strike a chord with every little monkey.

Praise for Mrs. McClosky’s Monkeys:
“As Mrs. McClosky watches her three rambunctious boys swinging from trees or climbing around the house, she sometimes has to admit to herself that they resemble monkeys. When the boys grow fur and sprout tails, it comes as no surprise – and everyone who knows them believes that these three terrors might be more at home in the zoo. They cause quite a sensation in their new environment. At first the boys enjoy providing a spectacle for the noisy crowds, but before long the novelty wears thin and they begin to pine for home. Mrs. McClosky is happy to have her boys back – even though they may not be completely cured of their apelike tendencies. This lively tale…displays a keen sense of imagination in which the transformation from boy to monkey is eerily convincing.”—Publishers Weekly