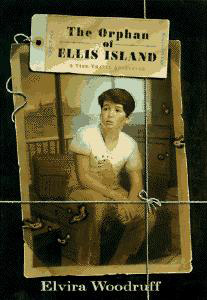 Dominic Cantori has a painful secret. He’s an orphan, and he doesn’t want anyone to know it.

One day, while on a class trip to Ellis Island, a tour guide asks everyone about their families. To avoid answering, Dominic flees from the group and hides in a closet where he falls asleep.

When he wakes up, the museum is deserted. Lonely and afraid, he picks up one display telephone after another and talks to the recorded voices of immigrants who tell about their lives in faraway places. To Dominic’s amazement, an old Italian immigrant answers him…And before he knows it, he’s transported back in time – to Italy in 1908!

Praise for The Orphan of Ellis Island:
"Dominic Cantori has spent most of his life in foster care. When a guide asks Dominic’s fifth-grade class to talk about their families during a field trip to Ellis Island, the boy is embarrassed because he has no heritage to discuss, and hides in a storage closet where he promptly falls asleep. Waking after the museum is closed, he panics until the prerecorded voice of one of the exhibits soothes him back to sleep. When he wakes again, he finds himself in Italy in 1908. He is befriended by three orphan brothers who are waiting for sponsors to pay their passage to America. Dominic becomes part of their adventures and gains a new sense of family. When one of the brothers dies tragically, Dominic accompanies the other two to America and discovers that the boys may actually be related to him in more than just spirit. He arrives on Ellis Island, first as a new immigrant, and finally as a boy returning from a long journey, or perhaps a dream, that has given him a new sense of himself as well as hope for his future. Easy to read and hard to put down, this convincing novel gives a poignant and believable picture of the lives and motivations of some of this country’s immigrants, and of one boy who learns about himself. While the time-travel element and subsequent plot twists occur almost too easily, the characters and situations are too involving to quibble about story construction. An enjoyable and informative tale."—School Library Journal

"Dominic, a lonely orphan boy, is accidentally left behind on a fifth-grade school trip to Ellis Island. Wandering at night through the museum, he listens to the narratives of immigrants in the exhibit and is shocked when one of the voices addresses him, telling him about life in Italy. Exhausted, Dominic falls asleep, and finds himself transported to the same village the narrator was telling him about, a place in southern Italy, where the immigrant and his two brothers teach Dominic what it’s truly like to be hungry and poor. They accept Dominic as a member of their little family, and eventually he ends up immigrating to America with them. The story, though not wholly plausible, sheds light on the values and experiences of Italian immigrants, with touches of humor and an easy-to-read style. An author’s note at the end provides a thoughtful bridge from real life to fiction."—Booklist