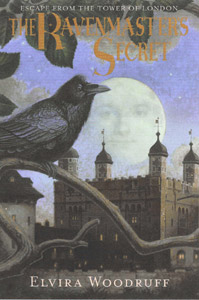 FRIENDSHIP IN THE TIME OF WAR

They were eleven years old. The year was 1735. She was the enemy, a young Scottish prisoner. He was her jailer, the Ravenmaster’s son. Escape was all but impossible. Or was it?

Come see for yourself as you cross the drawbridge of time into England’s most fortified castle: the Tower of London. A place were terror, not comfort, ruled the day. And a place where friendship could cost children their lives.

Praise for The Ravenmaster’s Secret:
“An absorbing historical adventure with a unique and colorful setting…Woodruff offers vivid sensory images of eighteenth-century London in a story that brings together children from three classes of society. The novel can be read for its exciting plot and sympathetic characters, but readers will also sense its underlying theme of courage, as Forrest seeks to prove to himself – and to others – that he is brave.”—Booklist

“The period touches will fascinate readers, too – from the stench of the moat to Forrest’s mother’s thrill at a public hanging. A colorful tale.”—Publishers Weekly

“Set in the dramatic time of Bonny Prince Charlie, this story brings fire and life to history…This compelling story portrays a boy who must do what he feels is right, as he faces moral dilemmas that would confound most adults. Woodruff creates realistic characters with whom modern audiences will empathize and sets them in a fascinating period that is certain to enthrall readers.”—VOYA

“…suspense, excitement, and interesting characters. Its message of judging people on their own merits and not on the basis of stereotypes comes across strongly.”—School Library Journal

“Suspenseful and touching, this is a thrilling and wonderful read.”—Marya Jansen-Gruber, Children’s Literature