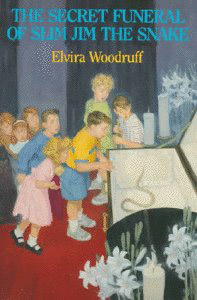 Nick is a normal, everyday kid – except for one big problem. He lives in a house above a funeral home. He’s lived there ever since his parents died. Nick’s friends make fun of him. His perfectionistic uncle expects him to do chores. And the neighbors next door think he’s a member of “the Addams family.”

Nick longs for the day when he will leave the world of caskets and hearses in an eighteen-wheeler truck, just like his dad did before he died. But then Nick discovers that being connected to a funeral parlor isn’t all bad. It can provide the perfect setting for a pet’s funeral. When Bernard Trauffman’s snake Slim Jim dies, Nick offers to give him a serious and secret ceremony at the Wiloby Funeral Home. In return, Bernard must give Nick the money he needs to order The Trucker’s Road Atlas, the self-proclaimed Bible of truckers everywhere.

Nick’s funeral plans for the beloved reptile not only have hilarious results, but Nick also discovers that his uncle is not as poor a father substitute as he originally thought.