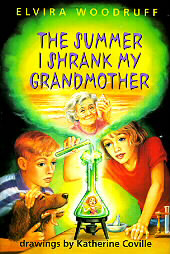 Budding scientist Nelly Brown is thrilled when she discovers an old chemistry set at her grandmothers summer cottage. The set includes everything for mixing up magic formulas, and guarantees that each child using the set can make a wish that will come true.Nelly adores her grandmother and mixes up a formula that makes her young again. But to Nellys amazement, her grandmother continues getting younger and younger. Luckily Nelly’s cousin Ben is on the way. Will they be able to save Grandma before she shrinks into nothing? Proof!

Praise for The Summer I Shrank My Grandmother:
“In the tradition of Scott Corbett’s The Lemonade Trick, this offbeat fantasy reveals the risks of meddling with fate as it recounts a child’s mishaps with an extraordinary chemistry set. After discovering an ancient box filled with mysterious powders, budding scientist Nelly Brown produces a formula to make her grandmother younger. But the 10-year-old gets more than she bargains for when she applies the potion: overnight, 70-year-old Emma is transformed into a lively 30-year-old. At an alarmingly rapid rate, her years continue to slip away until Nelly finds herself in charge of a helpless infant. While waiting for the heroine to stumble across the obvious solution to her predicament, readers will be entertained by her attempts to keep track of the elusive Emmy (‘That’s what I like to be called’), who grows more impish by the day. Although the premise is somewhat contrived, this novel is sure to stir young readers’ imaginations. Woodruff ( Awfully Short for the Fourth Grade ) seems to know all the tricks for holding a middle grade audience: blending elements of magic, fast-paced action and a dab of levity, she produces an irresistible tale.”—Publishers Weekly

“Nelly Brown, 10, is spending the summer at a seaside cottage with her grandmother while her scientist parents are away on research projects across the country. Nelly is an avid experimenter herself, and is delighted to discover a mysterious antique chemistry set in the cottage basement. With it, she concocts an anti-aging formula, and secretly applies it to her grandmother. It works only too well, and Nelly soon finds Grandma growing rapidly younger: first a 30-year-old, then a teenager, a 10-year-old, a toddler, and finally a fast-disappearing infant, all within a few days. The chemistry set only guarantees one successful experiment per user, but a solution will become apparent to readers, if not to Nelly, when they learn that her favorite cousin, Ben, is on his way to the cottage. This is an enjoyable fantasy with realistic concerns about the effects of aging balanced by the comic results of Nelly’s solution, and just a touch of real magic to spice up the story. The reading level, tone, and feeling are similar to Woodruff’s Awfully Short for the Fourth Grade (Holiday House, 1989), combining a childishly serious theme with funny results in an easy fantasy. It will appeal to the same wide audience.”—School Library Journal