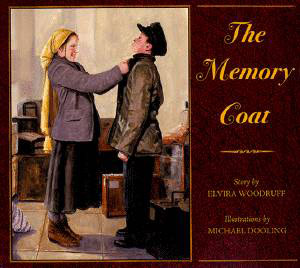 When the Tsar’s soldiers invade their Jewish community, Rachel and her family flee from Russia to America. But what they fear most is facing the inspection station at Ellis Island. For any wrong move there could cause one or all of them to be turned away. Hoping to make a good impression, the family pleads with cousin Grisha to let them replace his tattered old coat with a new one. But Grisha refuses. His mother had made the coat for him just before she died, and it still holds the powerful memory of her love. A harrowing experience upon their arrival threatens to separate the family. But it’s Rachel’s cleverness and Grisha’s cherished coat that ultimately keep them together.

Praise for The Memory Coat:
“An immigrant boy’s tattered woolen coat helps secure his entrance to America in this thoughtful picture book. Grisha, whose parents have died, now lives with his cousin Rachel’s boisterous family in a Russian shtetl. Grisha misses his parents terribly, though he finds comfort in playing storytelling games with Rachel (‘they were the best of friends’) and in wearing the now-ragged coat sewn by his mother. But after cossacks terrorize the Jews of the shtetl, Rachel’s family flees to America. At Ellis Island an inspector notes a scratch on Grisha’s eye and marks his coat, indicating that he is rejected. Luckily, quick-thinking Rachel turns Grisha’s coat inside out, allowing him to pass with the rest of the family. Woodruff (The Orphan of Ellis Island) steeps her tale in history, and at times the abundance of scene-setting detail bogs down the story’s pacing. Dooling’s (Mary McLean and the St. Patrick’s Day Parade) evocative oil paintings range from low-contrast two-color portraits to full-color scenes; many exude great warmth. A black-and-white spread depicting a huddled band of people, with anxious, strained faces, is particularly memorable. Endnotes supply facts about the plight of Russian Jews in the 19th and early 20th centuries, the mechanics of immigration and the role of Ellis Island.”—Publishers Weekly

“A moving story of a family emigrating to the United States from Russia at the turn of the century. To while away the days in their small village, or shtetl, Rachel makes up stories and her orphaned cousin draws pictures in the dirt or snow to illustrate them. Although Rachel’s mother offers to make Grisha a new coat, the boy clings to his threadbare jacket because it reminds him of his mother. When Russian soldiers come to round up the Jews, the family is forced to flee and makes the long, arduous journey to America. Grisha is nearly turned away by immigration authorities at Ellis Island because of a cut on his eye. Rachel saves the situation when she turns his shabby coat inside out to hide the doctor’s chalk mark. Realistic yet impressionistic oil paintings in subdued tones evoke scenes from village and farm life in the old country, while sepia-toned illustrations depict the hardships of the voyage and the grimness of the customs inspection. A touching story of immigration and the resiliency of those who underwent the transition, told with the fondness of a cherished memory.”—School Library Journal

“An upbeat Jewish immigration story begins in the Russian shtetl and ends with an extended family coming to America to escape persecution. The warm, realistic period paintings, some in color, some in sepia shades, focus on young Rachel and her bond with her cousin Grisha, who has lost his parents in an epidemic and comes to live in her house. When the raids of the Cossacks drive the family to leave for America, Grandmother Bubba tries to get Grisha to leave his tattered coat: how will he pass the dreaded inspections at Ellis Island? If he looks too weak, the doctors might send him back to Russia. But the boy refuses to part with the coat because it is lined with the wool from his mother’s coat, stitched by her for him before she died. When they get to Ellis Island, Grisha scratches his eye in a fall, and the doctor marks his coat with an “E.” The family is frantic that he will be sent back to Russia, until Rachel has an idea: she turns the coat inside out, and Grisha gets through. In a long, interesting author’s note, Woodruff discusses the shtetl and immigrant history, and also the true account she found in the Ellis Island museum of a child who got through the dreaded inspections after her family turned her coat inside out.”—Booklist

“The Memory Coat traces the courageous journey of a family of Russian Jews as they uproot their lives, abandon their homeland, and make their way to New York in search of religious and economic freedom. Woodruff’s carefully chosen text and Michael Dooling’s rich, realistic illustrations put young readers in the thick of it, by honestly depicting the sights, sounds, and smells of the immigrant experience.Yet the book takes on more than one family’s physical experience crossing borders: it also encourages children to understand and appreciate the powerful landscapes of memory and imagination. As a result of the hardships they endure, the central characters, Rachel and Grisha, possess powerful inner lives. Grisha, for example, who ‘had been orphaned when he lost his parents in an epidemic… would run to the alley behind the synagogue where he could be alone to grieve.’ Grief, however, is not the only experience these children share. During the day they are often left alone to play, tell stories, and revel in their own creativity. We are told that each takes great comfort in the imaginary worlds they create together. ‘Rachel loved to tell stories. And her cousin Grisha loved to draw pictures to go along with them…And once they began, the game could last for hours.’ In the end, acts of the imagination – such as storytelling – provide a release for the children.Woodruff’s tale encourages children to explore their imagination while acknowledging the emotional responsibility that often comes with remembering the hardships of the past. The portrait of immigrant life that emerges in The Memory Coat is complex, even handed, and above all, thoroughly enjoyable. The experiences of Rachel and Grisha demonstrate to readers of all ages that although a willingness to remember difficult events is emotionally tough, one’s ability to create a promising future is sometimes the greatest form of liberation.”—The Hungry Mind